The other side of New Moon is that which is found on the opposite side of the world in the small and fascinating country of Nepal. It is here that New Moon’s artistic vision takes form through the ancient craft of rug weaving. 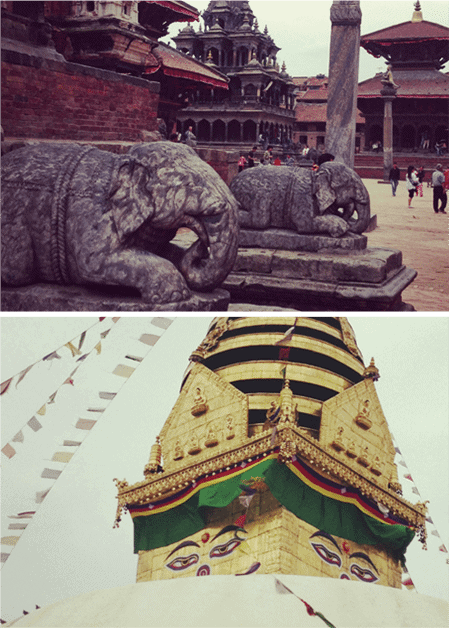 Early on, John was invited by USAID to travel to Nepal to advise the rug industry there on the ways to best capture a larger share of the US rug market for Nepal. It was during this time that John began exploring the idea of creating his own line of rugs and envisioned Nepal as a possible home for the production. Two main business goals became the focus of his attention during the brainstorming for New Moon – the artistic integrity of the design and structure, and the integrity of the culture in which the design would be transformed from a painting into a work of art for the floor.

LEADING THE WAY FOR POSITIVE CHANGE

New Moon has helped to create a standard of business ethics yet to be equaled in Nepal. The rugs would be made with the integrity and social responsibility John was unwilling to compromise on in order to make his dream a reality.

Since its inception, New Moon has been successful in aiding a larger social movement to change the rug industry of Nepal. It has done this by advocating that the standards created for its own production become a part of the standards for the entire industry. By encouraging, supporting, and funding the establishment of Goodweave it has further changed the industry by working to eliminate child labor in the rug industry. New Moon makes beautiful rugs that not only change the look of your home but also change the lives of individuals half way around the world.

New Moon workshops in Nepal are well-known as a world-class model for responsible business. Frequent foreign visitors, from the UN to various human-rights groups, testify to the impact New Moon has made in third-world business examples. Our commitment to the highest standards of working conditions is demonstrated by our long-standing and internationally-recognized commitment to fair treatment of employees and socially responsible business practices, as well as New Moon’s continued support and active participation with our workshops in Nepal.

“What an absolutely gorgeous fit! The rug is totally perfect in my bedroom and I just adore it! Thank you so much!”

“We have two New Moon ‘Persia’ rugs. They are the most beautiful pieces of furniture we own and they've been our best household investments. The carpets make our home warm and inviting, indeed they are ‘art we use every day.’ Our children learned to walk on them and in 10 years of heavy family use I can certify that the rugs seem to be made of iron as they've held up beautifully. We purchased the carpets through a dealer but when we've called New Moon in Delaware the staff have bent over backwards to be helpful. New Moon has great products made by great people!”

“I looked through your website, and I love the collections.”

“Our experience with New Moon Rugs has been absolutely wonderful; they have a ‘soul’, one that is personable, responsive and caring. They have something for every style interior even while their designs maintain timelessness. That’s one sophisticated, elegant product.

“Just thought you'd like to know our gorgeous rugs arrived on Monday! We are thrilled with them, have worked some room colors around them, and our Ponte Vedra decorator is delighted to personally see some of your work. Thanks so very much for all your help and care in shipping. Hope to see you in your new studio when we come back up to Wilmington in December. We still need a dining room companion rug.”

“I have been looking for a 6x9 rug for my dining area and was pleasantly surprised to see your sale items. In the ideal world, the rug would coordinate with the Goldleaf rug that I purchased from you several years ago. I had a terrific experience working with you in the past and would be glad to do so again if I can find a rug that would suit.”

"Read your email showing the Spring Collection with the newest designs and colors, and I must say they get more beautiful every season. It is a treat for the eyes to witness such creativity. I often try to imagine what a room would look like featuring one of your new rugs (I must admit to lusting after a few of them). I introduced my sister to the collection on your design studio website. She found a rug that would be perfect for their new master bath. If she's lucky it will still be available when they've reached the final stage of re-modeling. If not there are many others that will be suitable. Just wanted to compliment all of you at Kurtz for your designs, color selection, and quality. Just beautiful."

“The rugs are well-made and beautiful and the design is stunning! The staff at New Moon was very accommodating, easy to work with and very helpful! I highly recommend New Moon for people who want high quality, unique and gorgeous rugs!”

“They arrived this afternoon. Beautiful! Hard to choose one, but I think the larger one wins for size. We are spending some time trying to find a place for the smaller one since we cannot bear to part with it. Thanks for getting the rugs to us in good time. They really are beautiful.”

"New Moon Rugs has impeccable customer service and the quality of their rugs is outstanding. I will only buy New Moon Rugs from now on."

“WE LOVE OUR RUGS. They make such a difference now that we have taken away the old ones that they made room for ... little moments of joy ... a la JD Kurtz! And now we have our "Tangent" out as well and our 2nd floor is starting to look serene, at least at floor level.”

“New Moon rugs are awesome quality and even look better 'live' than on the Web. They are great to deal with and seem like a really good company. I have 2 now with another 2 on the way!!”

“Always a pleasure working with a local family business... they were extremely accommodating to my needs... allowing me to see the rugs in my space before I had to make a decision...& even delivered them for me!! Always a pleasure to shop & admire all the varieties of art...just wish I could afford everything in the store! Thanks again everyone!!!”

“Thanks so much for preparing those custom renderings. They are great. I really want them! The good thing is that I have stopped looking and KNOW what I want. In the meantime, I will dream about your rugs and hopefully order them this year. Thanks for understanding and trying your best to work with me. You {Erika Kurtz} and your dad {John Kurtz} couldn't have been more pleasant to work with.”

"I can not begin to tell you how happy we are with the rug! It is truly perfect. I smile every time I walk down the stairs. Thank you.”

“In 1995 we purchased our first rug from New Moon. As a result of their quality, uniqueness and service we’ve been customers ever since! We consider each rug a piece of art that complements the rooms in our home and eclectic decorating style.”

“I have lived in the Southwest for 40 years and I have never seen anything as striking and authentic as your Mesa Collection. Artist John Kurtz is a true genius at design.”

“I was walking past a rug gallery and was frozen in place by the iridescence of one of your rugs.”