John Kurtz, artist and renowned rug historian, has a love and appreciation for beautiful things, and for the way in which beautiful things are made. As a painter, he trained at the Pennsylvania Academy of the Fine Arts and the Accademia di Belle Arti in Florence. For the past 40 years, he has nurtured and deepened his passion for the world of handmade rugs. 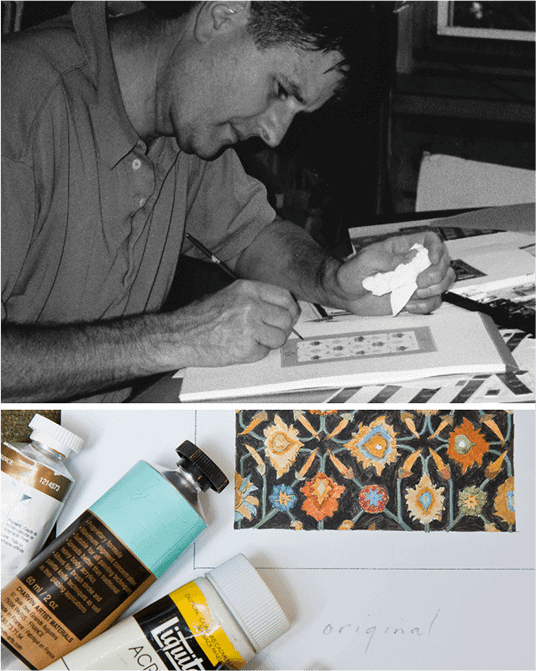 Starting out as an antique rug collector and dealer in the living room of his home, and later moving into a gallery where his business grew for 20 years, John enthusiastically searched for and found beautiful antique rugs and shared them with collectors from around the world. Early on in his career he was inspired to bring the wonderful art of rug weaving to an even larger audience. He did so with his popular PBS series Art Underfoot, which ran from 1988 to 1992 and then again on HGTV, introducing millions of viewers to the world of oriental rugs. In 1993 John began fulfilling a desire to have an outlet for his own creative process by taking his more than 20 years of experience in dealing in antique rugs to create original designs under the New Moon label.

After discovering an extraordinary partner in Nepal with whom he could make this vision a reality, New Moon was founded. Since the inception of New Moon in 1993, John has been uniting his dedication to the highest standards of craftsmanship and design with his commitment to socially responsible business practices. With the aid of his partners in Nepal, he not only creates a collection of rugs unequalled in quality but also a company known for social and environmental responsibility.

Since 2004, John’s daughter Erika has guided the production and increasingly brings her design talents to the next generation of New Moon. Daughter Josephine joined the firm in 2008 and brings her Art History/Architecture background to New Moon’s design focus. Along with John’s wife Ellen as the Doyenne, New Moon is truly a family business. 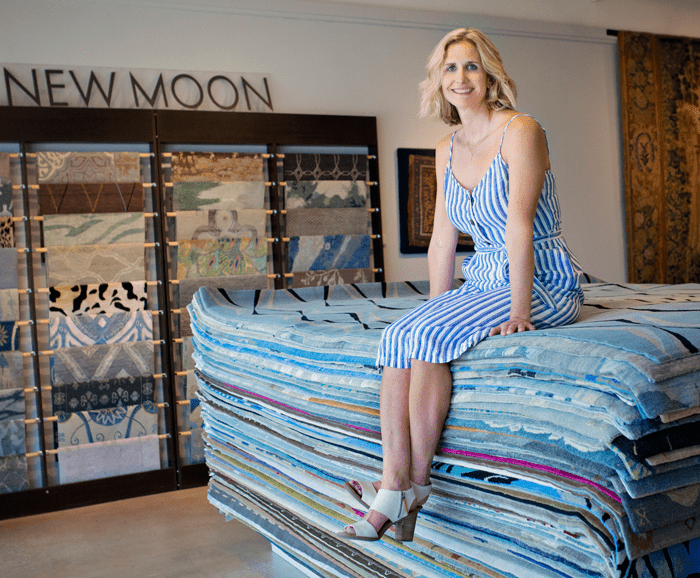 Having grown up exploring the world with her father on his business travels, her global experiences have influenced her understanding of business and her take on art and design.

Following her father’s passion for antique rugs and fine art, she combines her international experience with her practical knowledge of rug making to guide New Moon into new and exciting directions.

With extensive experience in the Tibetan rug industry and spending a significant amount of time every year in Nepal, Erika has first-hand knowledge about all areas of production and customization. She takes pride in participating first-hand in all of New Moon’s custom creations.

“I have lived in the Southwest for 40 years and I have never seen anything as striking and authentic as your Mesa Collection. Artist John Kurtz is a true genius at design.”

“We have two New Moon ‘Persia’ rugs. They are the most beautiful pieces of furniture we own and they've been our best household investments. The carpets make our home warm and inviting, indeed they are ‘art we use every day.’ Our children learned to walk on them and in 10 years of heavy family use I can certify that the rugs seem to be made of iron as they've held up beautifully. We purchased the carpets through a dealer but when we've called New Moon in Delaware the staff have bent over backwards to be helpful. New Moon has great products made by great people!”

“In 1995 we purchased our first rug from New Moon. As a result of their quality, uniqueness and service we’ve been customers ever since! We consider each rug a piece of art that complements the rooms in our home and eclectic decorating style.”

"I can not begin to tell you how happy we are with the rug! It is truly perfect. I smile every time I walk down the stairs. Thank you.”

“Always a pleasure working with a local family business... they were extremely accommodating to my needs... allowing me to see the rugs in my space before I had to make a decision...& even delivered them for me!! Always a pleasure to shop & admire all the varieties of art...just wish I could afford everything in the store! Thanks again everyone!!!”

“New Moon rugs are awesome quality and even look better 'live' than on the Web. They are great to deal with and seem like a really good company. I have 2 now with another 2 on the way!!”

“I have been looking for a 6x9 rug for my dining area and was pleasantly surprised to see your sale items. In the ideal world, the rug would coordinate with the Goldleaf rug that I purchased from you several years ago. I had a terrific experience working with you in the past and would be glad to do so again if I can find a rug that would suit.”

“They arrived this afternoon. Beautiful! Hard to choose one, but I think the larger one wins for size. We are spending some time trying to find a place for the smaller one since we cannot bear to part with it. Thanks for getting the rugs to us in good time. They really are beautiful.”

“Just thought you'd like to know our gorgeous rugs arrived on Monday! We are thrilled with them, have worked some room colors around them, and our Ponte Vedra decorator is delighted to personally see some of your work. Thanks so very much for all your help and care in shipping. Hope to see you in your new studio when we come back up to Wilmington in December. We still need a dining room companion rug.”

“Thanks so much for preparing those custom renderings. They are great. I really want them! The good thing is that I have stopped looking and KNOW what I want. In the meantime, I will dream about your rugs and hopefully order them this year. Thanks for understanding and trying your best to work with me. You {Erika Kurtz} and your dad {John Kurtz} couldn't have been more pleasant to work with.”

“What an absolutely gorgeous fit! The rug is totally perfect in my bedroom and I just adore it! Thank you so much!”

"Read your email showing the Spring Collection with the newest designs and colors, and I must say they get more beautiful every season. It is a treat for the eyes to witness such creativity. I often try to imagine what a room would look like featuring one of your new rugs (I must admit to lusting after a few of them). I introduced my sister to the collection on your design studio website. She found a rug that would be perfect for their new master bath. If she's lucky it will still be available when they've reached the final stage of re-modeling. If not there are many others that will be suitable. Just wanted to compliment all of you at Kurtz for your designs, color selection, and quality. Just beautiful."

"New Moon Rugs has impeccable customer service and the quality of their rugs is outstanding. I will only buy New Moon Rugs from now on."

“Our experience with New Moon Rugs has been absolutely wonderful; they have a ‘soul’, one that is personable, responsive and caring. They have something for every style interior even while their designs maintain timelessness. That’s one sophisticated, elegant product.

“The rugs are well-made and beautiful and the design is stunning! The staff at New Moon was very accommodating, easy to work with and very helpful! I highly recommend New Moon for people who want high quality, unique and gorgeous rugs!”

“WE LOVE OUR RUGS. They make such a difference now that we have taken away the old ones that they made room for ... little moments of joy ... a la JD Kurtz! And now we have our "Tangent" out as well and our 2nd floor is starting to look serene, at least at floor level.”

“I looked through your website, and I love the collections.”

“I was walking past a rug gallery and was frozen in place by the iridescence of one of your rugs.”